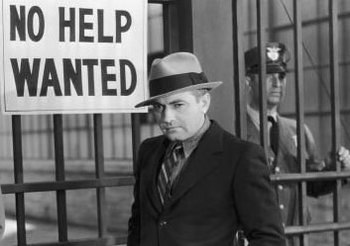 The Shell-Shocked Veteran in The Great Depression.
Directed by William A. Wellman, Heroes for Sale (1933) is a pre-code drama about the life of Tom Holmes, a returning WWI veteran. It’s a rare look at fallen servicemen that later films like The Best Years of Our Lives would also explore.
Advertisement:

Tom (Richard Barthelmess) suffers through the horrors of World War I and The Great Depression as a war hero with none of the glory; Roger Winston (Gordon Westcott), thinking Tom dead during a deadly mission, takes the credit for capturing a German officer and is awarded a medal of honour.

Back to civilian life after recovering from his injuries as a POW, Tom has a crippling morphine addiction and is treated unjustly even when he sacrificed so much for his country.

Able to kick his addiction, Tom finds himself in Chicago where he meets kind Mary (Aline MacMahon) and her father who run a restaurant and an apartment building. There he meets and falls in love with Ruth (Loretta Young). Ruth works at a laundromat and gets Tom a job there. With his quick mind, he’s able to work his way up and live a relatively happy life. But it begins to fall apart when his boss dies, and the company is taken over by uncaring businessmen. Thrust once again into uncertainty and torment, Tom struggles to keep his dignity and care for his family and friends.