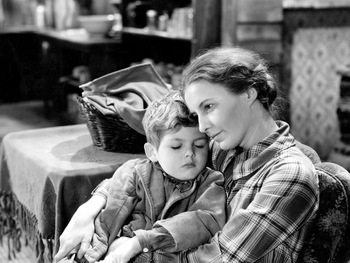 So Big is a Pulitzer Prize-winning 1924 novel by Edna Ferber.

The story follows several decades in the lives of a mother and son. Selina Peake is the spirited young daughter of a widowed gambler in late-19th-century Chicago. After her father is shot and killed, Selina is left alone in the world at the age of 19. She leaves the city and gets a job teaching in the Dutch farming village of High Prairie, Illinois (nowadays, the Roseland

neighborhood of a larger Chicago). She marries a stolid but decent farmer, Pervus DeJong, and seemingly settles for life in grim poverty and hopelessness. But after tragedy intervenes, Selina makes a success out of her husband's little farm.

The second part of the novel follows her son Dirk. Selina sends Dirk off to college, and he studies to be an architect. His mother, who still has an appreciation for art and beauty despite spending decades scratching out a living as a farmer, is proud of her son for picking a noble profession. But after World War I leaves Dirk feeling more cynical about the world, he decides to make money as a bond trader, much to Selina's disappointment.