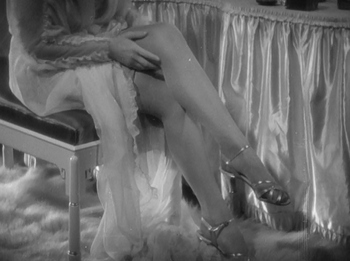 First shot of the movie, folks.
"A good sock in the eye is something every woman needs at least once in her life."
Advertisement:

Vicki and Tony Thorpe (Blondell and William) are an upper-class married couple with some problems. Tony is pretty plainly not satisfying Vicki in the bedroom, which leads to her mercilessly teasing him. When she needles him too much at a dinner party for friends, Tony slaps her in the face. Vicki, with the encouragement of family friend and divorce attorney Vernon Thorpe (Edward Everett Horton) immediately files for divorce, and marries Vernon. However, in reality she still loves Tony, and sets out to win him back.

This film was made at the end of The Pre-Code Era and is an all-time example of Values Dissonance. It is full of nonstop Fanservice, winking double entendres, and sex talk. Most amazingly, and possibly most off-putting to a 21st century viewer, is the central message: men should hit their wives to keep them in line. It turns out that the real problem in the Thorpe marriage is that Vicki really likes being slapped around and sexually dominated, and is discontent with Tony because he doesn't hit her enough.