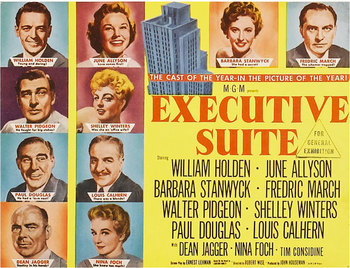 Executive Suite is a 1954 drama film directed by Robert Wise.

It is a story of corporate maneuvering and machinations at the Manhattan headquarters of Treadway Corporation, a furniture business. Avery Bullard, president of Treadway, calls a Friday evening meeting of the corporate board to elect a new executive vice-president. Mere minutes after having his secretary, Erica Martin (Nina Foch), send out the telegram, he drops dead on the street of a heart attack. George Caswell (Louis Calhern), a member of the Treadway board, sees Bullard lying dead on the sidewalk and immediately phones in an order to short-sell

Treadway stock. However, when a man in the crowd steals Bullard's wallet, there is a delay in making an ID on the body.

By that night, however, Bullard is identified. This sets up a mad scramble to decide who will be the next president of Treadway, with the five vice-presidents of Treadway in contention. They are:

Rounding out the All-Star Cast is Barbara Stanwyck as Julia Treadway, daughter of the late founder of Treadway and lover of the late president, Bullard. She is bitter at the both of them for neglecting her in favor of the company before they both died suddenly (her father having killed himself).