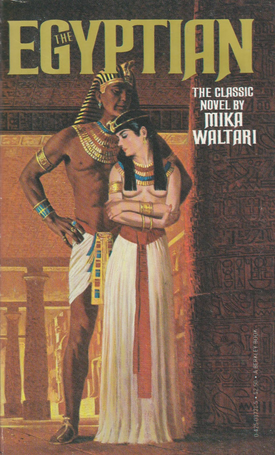 "During my life I have seen, known, and lost too much to be the prey of vain dread; and, as for the hope of immortality, I am as weary of that as I am of gods and kings. For my own sake only I write this; and herein I differ from all other writers, past and to come."
— Sinuhe
Advertisement:

The Egyptian (or Sinuhe the Egyptian) is a historical novel by Mika Waltari first published in Finland in 1945. It details the life-story of an Egyptian doctor named Sinuhe, and his interactions with others during the turbulent reign of Akhenaten during the 18th dynasty.

The story is told via the Framing Device of Sinuhe writing down his memoirs; as this clever device allows for plenty of room for doubts as to his reliability, the novel is an impressive example of combining both Shown Their Work and Science Marches On: much of what Waltari writes was considered the best historical knowledge of his day, although much has also been reevaluated by modern historians. The main character of the book is named for the protagonist of a story called The Story of Sinuhe who overhears a secret and has to leave Egypt. The parallels to the protagonist of the novel is noted by characters inside the story.

Sinuhe's story begins when he is found as a baby floating down the Nile in a reed boat; he grows up to become a doctor, and in the process, he meets and befriends Pharaoh Akhenaten, as well as General Horemheb. After losing all his possessions to a woman, he escapes into exile, where he spends his time spying and learning in various foreign lands. In Babylon, he meets and sets free a woman named Minea destined for human sacrifice on Crete; after her death, Sinuhe returns to Egypt and becomes embroiled in the conflict between the king with his new god Aten and the old priesthood of Amun. Eventually, Sinuhe poisons Pharaoh, and Horemheb becomes ruler of Egypt, although first under a succession of puppet-rulers. Finally, Sinuhe confronts Horemheb over his various misdeeds and is sent into exile again, where he writes down his life's story.

Sadly, the only English language version available of the novel is an abridged version, which cuts the original 900+ page novel down to 500+ pages. The complete novel has been translated unabridged to several other languages though.

The novel was made into a 1954 20th Century Fox film starring Edmund Purdom as Sinuhe, Michael Wilding as Akenaten, Bella Darvi as Nefer, Jean Simmons as Merit, Victor Mature as Horemheb, and Peter Ustinov (doing his usual scene-stealing) as Kapteh. It is hard to believe that this rather ponderous movie was directed by Michael Curtiz, the director of Captain Blood, The Adventures of Robin Hood, and Casablanca. Nevertheless, it has a memorable score by Bernard Herrmann and Alfred Newman. Marilyn Monroe apparently auditioned for the role of Nefer. The movie has some substantial differences from the novel.

The book was also adapted into a radio series in the 80's by the Finnish group Radioteatterinote Who also translated The Men from the Ministry. While only available in Finnish, it can be listened for free in YLE Areena