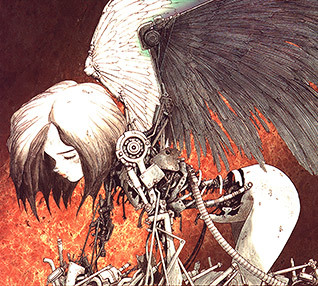 How do you put divinity back together?
"Falling from heaven is not as painful as surviving the impact."
— Magic: The Gathering, Tormented Angel

Many fantasy creatures are fantastic. Whether a sphinx, dragon, or steam powered robot beetle; whether practically human, incomprehensible or pure evil, these creatures can elicit a sense of wonder and terror in any observer.

Now imagine someone took a sledgehammer to that marvel and left it bleeding and broken on the floor.

That is the Broken Angel, a fantastic creature that has been stripped of their fantastic. This can take many forms: the eponymous angel with hurt wings, broken horned unicorns, newly mortal elves (or any other immortal being), magicless wizards, robots whose body is centimeters from going offline, etc. When played for drama, this is usually used to evoke deep sadness. This is a unique, beautiful creature that has been cruelly torn asunder. Not even killed, but left alive to suffer being flawed after having been perfect or at least "the way I was meant to be." As you can imagine, a lot of Fallen Heroes have this as a backstory.

When one is killed you can expect the killers (even if they're heroes) to lament destroying something that is one of a kind. If it was the Last of His Kind, this serves a double whammy by signaling the End of an Age: there will be no more like it, ever. If a villain is the one doing the killing or crippling, they haven't just Kicked The Unicorn, they broke off the horn and stabbed it to death with it. May make its home in a Fantastic Nature Reserve.

On the positive side, they may be able to heal naturally, get repaired, seek redemption or Find the Cure!. However the story presents a way to make the "fantastic" be restorable, finding the cure will be a quest in and of itself. If the Broken Angel is found by a Good Samaritan, they'll get some help to this end by being hidden and nursed back to health. Of course, there will be danger from those who did the breaking coming, or from locals with Torches and Pitchforks out to finish the job.

On the other hand, this can be used as a Karmic Transformation (more like "Karmic Crippling" in a few instances) to punish rebellious members of this species. Whether for good or bad behavior depends. If it was due to evil, you can expect these Fallen Angels to wear their broken wings with defiant Pride. Even more rarely, rather than grieve over the loss after being Brought Down to Normal or De Powered this way, they might like the change.

Contrast Freakiness Shame. No real overlap with One-Winged Angel, unless the being still has enough juice to enter a Super Mode which prominently features their one good wing. Not to be confused with but similar to Broken Bird. See also Unicorns Are Sacred.