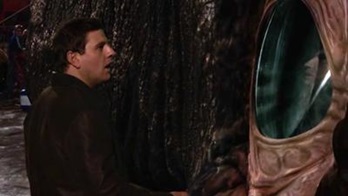 Rhys's eyes are opened to the existence of aliens... by peering into the eye of an alien.
Rhys: What, exactly, do I need protecting from?!
Gwen: I CATCH ALIENS!
(long string of profanities)
Rhys: Piss off! Aliens? In Cardiff?!
— Gwen finally has to tell skeptical Rhys the truth about Torchwood, leading to a verbal crossfire
Advertisement:

The team investigates a meat company whose product seems to be extraterrestrial in origin. Jack makes the requisite bad innuendo puns about "eating alien meat". By complete coincidence, the meat is transported by... Rhys's company. Gwen doesn't like that at all, because inevitably, Rhys follows them and finally learns what Gwen does for a living.

The meat comes from a giant sentient Space Whale that regenerates infinitely. Sort of like Jack, only half asleep, immobile and very large. Doctor Who spoilers  ... So, sort of like Jack near the end of his life, really. Jack feels strong empathy for the beast and vows to save it. He also merrily flirts with Rhys's Hollywood Homely secretary, who looks like she hadn't been flirted with in years.

The gang, including Rhys, inflitrate the bad guys' lair, but they all get caught. Rhys takes a bullet for Gwen. The villains are defeated and given amnesia drugs, but Owen has to put the Space Whale down.