The Masquerade Will Kill Your Dating Life 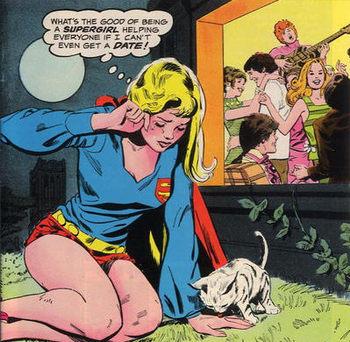 "For THIS, I'm missing a date?"
— Terry McGinnis, on the receiving end of a beating, Batman Beyond
Advertisement:

What you do for a living is typically a big part of who you are, and when you start getting serious with a boyfriend or girlfriend, you probably like to talk about how your day went. But what if you spend your day saving the planet from alien invasions? Or hunting down vampire serial killers? What if what you do for a living is so fantastical telling them about your Secret Identity will convince them you are a liar (in which case they dump you), convince them you are insane (in which case they try to have you committed and/or dump you), or horrify them to the point where they (guess what) dump you? Of course, the people you work for in this fantastical world may insist that should you ever tell your significant other, you'd have to immediately kill them.

Is it any surprise, then, that the Masquerade will (make you) kill your dating life?

A lot of times, the pool of eligible bachelor(ette)s in on the Masquerade is rather small, and since Everybody Has Lots of Sex, it won't take long for you to work your way through them. But if you try to date outside of the masquerade, be prepared to stonewall every time your new beau asks "So how was your day?" or "When do I get to meet your friends at work?" or "Why do you always come home with blood-stained clothes and smelling of gunpowder?" Expect much angst about having to lie to the current most important person in your life that doesn't have a spot in the opening credits. That's if you can keep the many, many lies from collapsing in on themselves, that is. These relationships tend to end in one of three ways (don't they all?), with several subtypes:

Usually, the Love Interest freaks out. Rarely... very rarely... the Love Interest doesn't freak out at all and instead reacts with some variation of "Huh... well that explains a lot." Of course, adding a regular character who is in the know will remove a huge source of drama, so any girlfriends or boyfriends that find out about the Masquerade have a life expectancy of a few hours. Compare It's Not You, It's My Enemies. May be because she or he Loves My Alter Ego. Often the cause of a character being Hollywood Dateless. A subtrope of Keeping Secrets Sucks. If your heroic job threatens your dating life for reasons other than its secrecy, see Loved I Not Honor More. If letting the Love Interest in on the secret is what causes the break-up, that falls under Love Cannot Overcome. As such, it is an aversion of Understanding Boyfriend.

See also Muggle–Mage Romance, on which this trope can negatively impact.