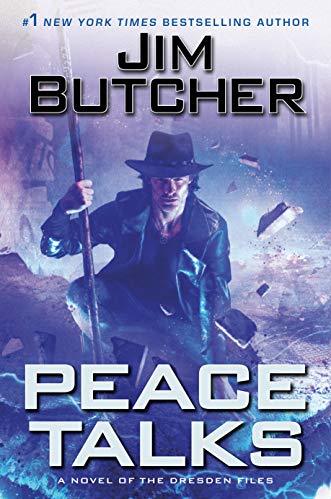 "I had that sinking feeling that life was about to get hectic again."
— Dresden
Advertisement:

Peace Talks is book #16 in The Dresden Files.

The one where Harry handles security for a convention of some of the most powerful entities on the planet.

It's been a rough few years since Harry Dresden destroyed the Red Court. The death of such a powerful faction resulted in a massive power vacuum, and the monstrous Fomor have been trying to exploit it, seizing territory from others and abducting magical creatures of all types for their own evil ends. But now, after years of low-grade warfare, they say they want peace. They propose a series of talks to hash out their differences, and the other factions agree. In fact, Baron Marcone of Chicago does more than agree: he volunteers to host the talks right in his hometown.

And poor Harry Dresden winds up on the security team.

Once again surrounded by enemies, Harry must use all his skills to ensure the safety of himself, the other wizards, and the innocents of Chicago. But this time, even a wizard as strong as Harry Dresden might not be able to keep everyone safe.

made available to read on jim-butcher.com, which also has an official trailer

for the book. You can also read an excerpt from a later chapter here