Kidnapped by the Call 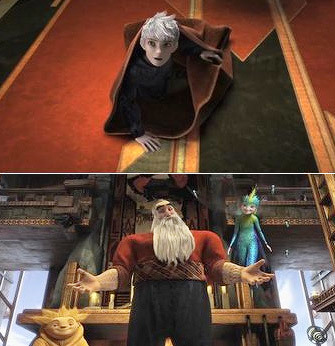 It's not everyday Santa has you stuffed in his sack.
North: I hope the yetis treated you well?
Jack: Oh, yeah. I love being shoved in a sack and tossed through a magic portal.
North: Oh! Good! That was my idea!
— Rise of the Guardians
Advertisement:

Sometimes the hero of your adventure (or one of his allies) just isn't going to come willingly. Maybe they've got other responsibilities; you know, those pesky families would-be heroes are so often attached to. Maybe they've got little reason to believe that mysterious prophetic dream you had once while you were asleep and possibly drunk. Or perhaps they're just cowardly. At any rate they aren't coming.

Problem is you're the good guy. You can't just destroy the place the hero has settled him or herself into. And the bad guys aren't about to make that mistake themselves, at least not until it's too late. You've either tried various means of coercing the hero into adventure or discounted them as impossible. Or at least you should have. The answer remains no. What can be done?

Simple. If the hero isn't willing to come along, you're just going to have to force them, whether through softer measures such as blackmail or the draft (or threatening the hero with the draft) or through the considerably more direct means of stuffing the recalcitrant rascal in a sack and slinging them over your back in the dead of night. Either way, the hero is now off to adventure, whether they like it or not!

One indirect method is the subtrope Boxed Crook; the government agrees to let a criminal go early provided they partake in some (in this case heroic) venture first. The crook usually ends up wishing they'd taken the jail time. A fantasy version is Summon Everyman Hero if the would-be hero wasn't consulted first before being dragged through the portal.

Methods vary regarding how to keep the hero from sneaking off again. An Explosive Leash is a good guarantee, but you have to at least appear ruthless enough to use said leash. If you can keep the hero around long enough a combination of Stockholm Syndrome and the hero seeing firsthand the righteousness of your cause may set in.

Oddly enough, this never seems to backfire on the kidnappers. Despite having plenty of reason to hate their guts, the kidnapped hero will rarely, if ever, betray or kill them in retaliation for this treatment, even if they get the chance to do so.

Compare and contrast The Call Knows Where You Live. Contrast Jumped at the Call. Closely related to Press-Ganged which covers direct incidents where someone is actually kidnapped into serving a cause, be it good or evil. Compare Summon Everyman Hero, where the only way for the good guys to get the hero is via cross-dimensional kidnapping. Also compare Kidnapped by an Ally, where the kidnapping isn't necessary but happens anyway.

Subtrope of Call to Adventure. See also Trapped in Another World.

Spyro's vacation to Dragon Shores is intercepted by Elora, Hunter and the Professor, who needs his help in stopping Ripto.

Spyro's vacation to Dragon Shores is intercepted by Elora, Hunter and the Professor, who needs his help in stopping Ripto.