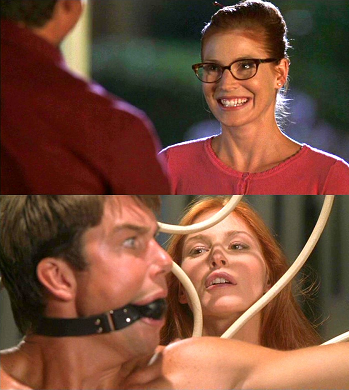 Geek in the streets, freak in the sheets.
"You know her by day
But you don't know Karen by night."
— Jill Sobule, "Karen by Night"
Advertisement:

Alice is a librarian. During the day, she wears long skirts, a loose blouse done all the way up to her neck, her hair in a bun and sensible shoes.

Get Alice home to her significant other, however, and well — the blouse is going to be on the floor, the skirt in the hall, her hair all over the place... and the rest is too NSFW even to describe. As strait-laced as Alice may be in public, none of that carries over into her private life — and vice versa.