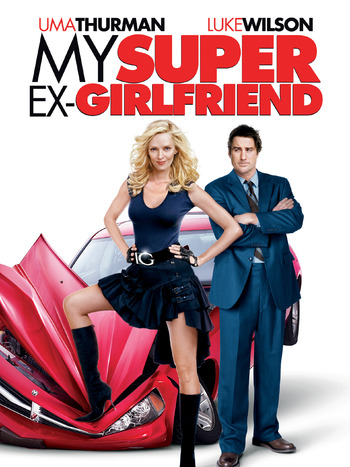 Matt Saunders (Luke Wilson) is your basic everyman, who unwittingly ends up dating Superheroine G-Girl's alter ego, Jenny Johnson (Uma Thurman). He finds out her secret, but soon also discovers that she's a Clingy Jealous Girl and breaks up with her for being controlling and dangerous.

She doesn't take it very well, especially when he starts dating his co-worker Hannah Lewis (Anna Faris). Meanwhile, her Arch-Enemy Prof. Bedlam (Eddie Izzard) hatches a plan to use this domestic dispute to De-Power her, and enlists Matt to spring the trap.

My Super Ex-Girlfriend provides examples of: