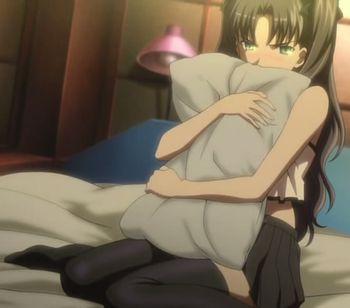 What's wrong? You're usually more harsh than this.
Advertisement:

A character who is unusually aggressive and domineering in their relationships and particularly romantic/sexual advances yet relinquishes all control the moment it comes to actually having sex with their loved one.

This behavior is commonly displayed by "harsh" Tsunderes. Parallels can be drawn between this and a Faux Action Girl. Indeed, women in fiction end up on the receiving end of this trope much more often than men (cf. Men Act, Women Are). Although in Courtly Love the (lower status) man will invoke this trope as a way of proving his loyalty to the woman.

Note that Tropes Are Tools. This one can present an interesting dichotomy in a character to explore for drama and Character Development. It only becomes off-putting when perpetrated in fanworks upon characters who you'd reasonably expect to behave in bed the same way they do in canon.

For the male/male case, this is a standard (although somewhat less common) type of Uke in Boys' Love Genre works. They're similarly likely to be Tsundere. Because this is a same-sex variation, the Double Standard does not apply, so this trope is generally used in-character. More uncommonly, but still very much present, you will find inversions of this trope, with an aggressive (or even violent) Seme who becomes compliant, gentle and subservient to the Uke's wishes while in-bed - playing with the balance of physical and emotional control in the relationship. The exceptions for in-character usage of this trope are again fanworks where canon characters are used for Wish-Fulfillment.note Or just someone not writing characters well.

Compare Casual Kink, Powerful People Are Subs, Property of Love, Safe, Sane, and Consensual, Safe Word and All Women Are Doms, All Men Are Subs. Contrast Naughty by Night.