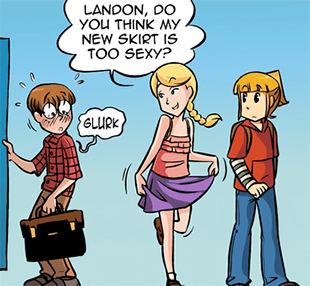 "She tried to sit in my lap while I was standing up."
— Philip Marlowe, The Big Sleep
Advertisement:

A Femme Fatale in training, a Fille Fatale (French for "fatal girl", idiomatically "girl to die for") is an adolescent or younger girl who knows how to use her looks to get what she wants.

Where some will focus solely on their peers, others want actual grown men and will proceed to seduce one. She may well initiate a Teacher/Student Romance plot. This, of course, has much bigger implications for the adult in question, who is very liable to suffer sacking at best (if he's a teacher), with a statutory rape charge being more common (depending on jurisdiction).

It is also not uncommon to depict her as a major, but so much younger and less mature than the rest of the cast that she is far closer to this trope than to Femme Fatale or The Vamp, particularly if her advances towards older men are rejected.

Compare her Spear Counterparts, the Kid-anova and Dirty Kid. In gay media, a particularly young and aggressive Twink can fill much the same role.

For obvious reasons, Dawson Casting is very likely, as is a Hand Wave that the character is much older than she looks (maybe even to the point of Really 700 Years Old). See also Troubling Unchildlike Behavior. In some Western countries (though certainly not all of them), a major source of Squick.