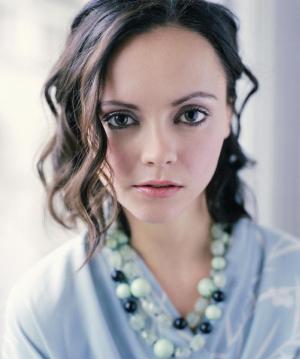 "My dream role would probably be a psycho killer, because the whole thing I love about movies is that you get to do things you could never do in real life, and that would be my way of vicariously experiencing being a psycho killer. Also, it's incredibly romantic."
Advertisement:

Christina Ricci (born February 12, 1980 in Santa Monica, California) is a Former Child Star, and now respected actor in her own right. Ricci acted in such movies as Mermaids (alongside Cher and Winona Ryder), The Addams Family motion pictures, Casper, and as an adult in The Opposite of Sex, Buffalo '66, Sleepy Hollow (1999), Monster, the remake of That Darn Cat!, Speed Racer, New York, I Love You, After.Life and The Matrix Resurrections. She also starred as Sexy Stewardess Maggie on Pan Am.

She was married to James Heerdegen, a dolly grip whom she met on the set of Pan Am, and they have one son named Freddie born in 2014. They divorced in 2020, with them having a custody dispute, after which Ricci was granted sole custodial responsibility (though Heerdegen has visitation rights). She was also granted a protective order, alleging emotional and physical abuse from him during their marriage. In 2021, she married hairstylist Mark Hampton and has a daughter named Cleopatra with him.

Her acting roles provide examples of: