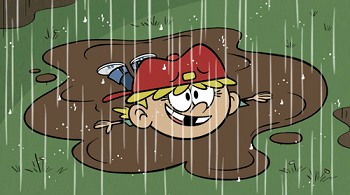 Pepper: This'll be fun!
Cadpig: I always wanted to get good and dirty!
— 101 Dalmatians
Advertisement:

Basically, this is a trope for when somebody finds playing in dirt and getting dirty enjoyable. Especially common if the character is The Pig-Pen or Hates Baths, however, they may not mind getting clean, they might just enjoy getting dirty. Pigs are common for this.

Someone who believes that Messy is Fun might have trouble getting along with a Neat Freak who won't let them play in the mud or gets cross when they dirty their clothes. The messy character might view the neat freak as being boring or a killjoy, which might result in Slobs Versus Snobs being in play.

Sometimes, the neat freak character gets in on the messy fun too after accidentally getting dirt on them, but other times they don't. Has nothing to do with that kind of Filth.

Diesel's party for Triple D turns out to be such a hit, that even mom and Dad get in on the action.

Diesel's party for Triple D turns out to be such a hit, that even mom and Dad get in on the action.