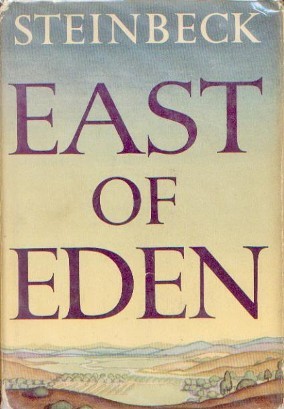 "If you want to give me a present, give me a good life. That's something I can value."
— Adam Trask
Advertisement:

A 1952 novel by John Steinbeck, East of Eden was considered the author's most ambitious work. The Hamilton family in the novel is based off that of Steinbeck's maternal grandfather. He considered it his Magnum Opus.

The novel concerns two families, the Trasks and the Hamiltons, who live in the Salinas Valley, California. The Hamiltons, headed by patriarch Samuel Hamilton and wife Liza, initially settle into the valley with their nine kids. When the kids set out to seek their fortunes, the land is settled by the wealthy Adam Trask. The Trask family grows, adding a wife, Cathy, a Devil in Plain Sight, and sons Cal and Aron. Just after the birth of the two sons, Cathy vanishes from their lives. Years later, the now-grown boys meet a girl named Abra, whose presence drives a wedge between the two.

The book was adapted into a 1955 film, directed by Elia Kazan and starring James Dean in his breakout role as Cal. The film notably is a very loose adaptation, only covering the last part of the story with Aron and Cal as teenagers; this was approved by John Steinbeck. For tropes exclusive to the film, go here. It was later adapted into a miniseries in 1981 featuring an All-Star Cast.

Not to be confused with Eden of the East nor Far East of Eden aka Tengai Makyou. Not related to the book West of Eden either.