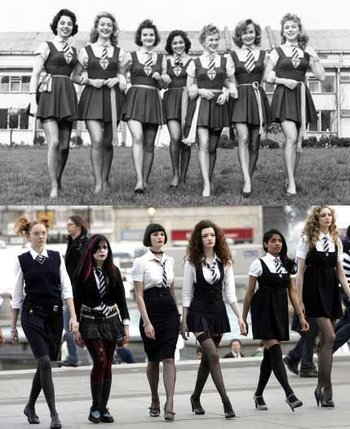 "We are the best,
So screw the rest.
We do as we damn well please.
Until the end,
St. Trinian's,
Defenders of Anarchy!"
— Girls Aloud, St Trinian's (2007)
Advertisement:

St. Trinian's is a film series based on a series of cartoons by Ronald Searle (also known for molesworth and Dick Deadeye, or Duty Done). The setting is a disreputable girls' school, where the only rule is that there are no rules. The girls themselves are teen and pre-teen horrors who are not above using their feminine wiles to get away with murder. The teachers? They teach the girls how to get away with crime in foreign countries, and mixing drinks. The headmistress, Miss Fritton, has no interest in maintaining any form of order. And there is a local spiv, Flash Harry, who makes money from whatever schemes the girls cook up (usually).

The original film series consists of:

In 1980, a revival was made, The Wildcats of St. Trinian's, which follows the girls as they go on strike by kidnapping a young oil heiress. Joe Melia took over as Flash Harry. The film was a critical and commercial failure.

In 2007, a new film was released, this time simply called St. Trinian's (St. Trinian's School for (Bad) Girls in DVD release), and starring an ensemble of well-known English talent. When the school is threatened with foreclosure by the bank and the ultra-conservative Minister of Education, the girls, faced with threats from all sides, decide to pull off the biggest heist ever concocted by a bunch of teenagers. This one features Russell Brand as Flash Harry, Rupert Everett as Miss Fritton, and Colin Firth as the Minister of Education, and thus avoids the Celebrity Paradox by making jokes about Another Country, Pride and Prejudice (1995) and Girl with a Pearl Earring. It's also notable for Firth and Everett performing "Love Is in the Air" over the end credits. Two years later followed a poorly-received (though not bad) sequel, St. Trinian's 2: The Legend of Fritton's Gold (featuring David Tennant as the villain).

Tropes that span the entire franchise: