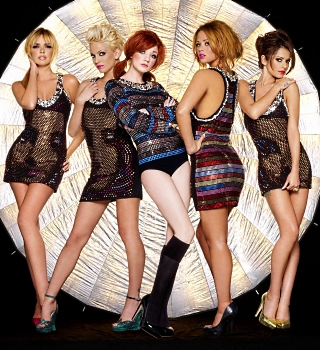 Originally created by the Talent Show Popstars: The Rivals which debuted in November 2002 in the sense that members were actually voted for by the viewing public, Girls Aloud long outlasted the male group also created and have 20 UK Top 10 singles to their name, including four UK Number Ones. They also appeared as the school band at the end of the 2007 St Trinians movie.

Formerly on hiatus (for what was intended to be one year but ultimately became three-and-a-half), it was announced in May 2012 that the girls were recording new material with their longtime collaborators Xenomania. After months of speculation, it was finally confirmed that the fivesome would reunite to release a new single for Children in Need 2012, as well as embark on the Ten: The Hits Tour, their first in almost four years.

On March 20 2013, the band officially announced their disbandment, following the final date of their Ten: The Hits Tour. Former member Sarah Harding passed away from cancer on the 5th September 2021.

This pop group contains examples of: