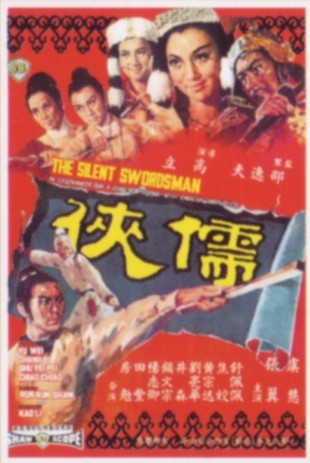 The Silent Swordsman is a 1967 Shaw Brothers film starring Chang Yi, Shu Pei-pei (not to be confused by Cheng Pei-Pei), Lisa Chiao and directed by Kao-li.

The movie is a Spiritual Adaptation loosely based on the Louis Cha / Jin Yong novel, The Book and the Sword, but with entirely original characters specifically created for the film.

During the Song Dynasty, in the middle of a war against the Mongols, a leading general of the Imperial court is suspected of being a traitor. A young martial arts student, Shen Bingyi (Chang Yi), searching for his missing brother during the war, ends up uncovering a plot to overthrow the government when he inexplicably ends up falling for a pair of Mongolian sisters whom are daughters of a Mongol warlord.

Due to being released six weeks after the other Shaw Brothers classic, One-Armed Swordsman, The Silent Swordsman is pretty much swept under the rug ever since it's release, but it's worth a look for Shaw Brothers fans interested in their older stuff, notably one of the studio's first attempts at a multi-genre mishmash of a film.

The Silent Swordsman contains examples of: