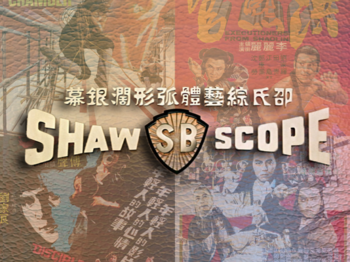 The old, nostalgic logo, which is inspired by Warner Bros..
Advertisement:

Shaw Brothers (HK) Ltd. (Chinese: 邵氏兄弟（香港）公司) was Hong Kong's largest film production company. Based in Clearwater Bay in downtown Hong Kong, it operated between 1925 and 2011, when it was reorganized into the Clear Water Bay Land Company Limited; its film production business was taken over by other companies within the Shaw conglomerate. It was founded by the brothers Shaw Run-jie (邵仁杰), Shaw Run-mei (邵仁枚), and Shaw Run-de (邵仁棣), with the youngest of the brothers note For the record, their father had a total of six sons., Shaw Run-run (邵仁楞) note In the Mandarin-speaking world, he's better known by the name "Yat-fu" (逸夫, "Yifu" in Hanyu Pinyin), being appointed executive producer and in charge of cinematic productions.

The studio is known for their massive, large-scale Wuxia martial arts films that dominated Hong Kong cinema in the 1960s and 70s, and making "Shaw Brothers" a name synonymous with kung fu. At its peak of operations the studio had 5,000 extras available at any given time, allowing multiple films of varying genres to be made all at once.

Having produced over 1,000 films throughout its existence, and launched the careers of numerous martial arts icons from Gordon Liu to Ti Lung, Shaw Brothers would last until the late 90s when its remake of Boxer From Shantung, titled Hero (1997), would be its last major production before it closed down. Nowadays, the former Shaw Brothers studio backlot is more popular as a tourist attraction. It briefly re-opened in 2002, for filming the House of Blue Leaves scene in the first Kill Bill movie, directed by Shaw Brothers fanboy Quentin Tarantino.

A Partial List of Movies Produced by this Studio: