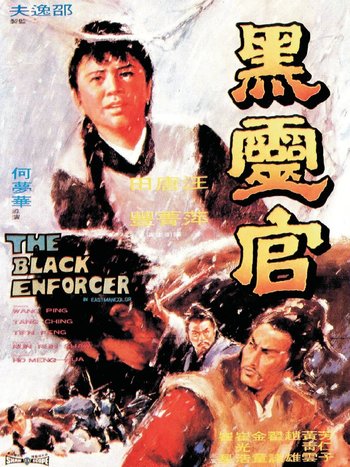 Kung Tien-Lung, a lawful Ming Dynasty Imperial officer whose reputation has earned him the nickname "The Black Enforcer" is currently on one last tour of duty, to escort the convicted murderer and bandit lord, Yun-Fei (long-time Shaw villain actor Tien Feng), through the mountains of the Mongolian border. Stopping over at his home where Tien-Feng rendezvous with his mother and sister, and eager to come back to them a few days later, his plans for a reunion are cut short when a legion of bandits working for Yun-Fei attacks his home. With his comrades, and his family, killed in the ensuing battle, and himself a wanted fugitive suspected to be working with the bandits, Tien-Feng, the once-honourable Black Enforcer, is sentenced to 15 years in prison.

15 years later, Tien Feng sets out on a bloody path of revenge.

The Black Enforcer contains examples of: