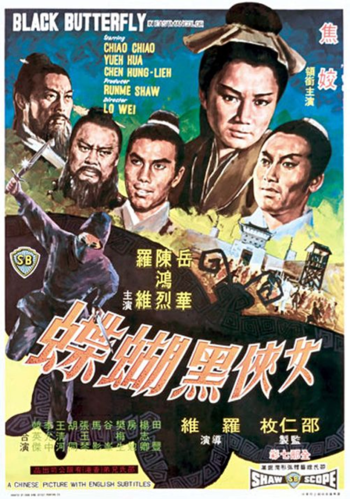 Black Butterfly is a 1968 Wuxia movie directed by Lo Wei and produced by Shaw Brothers.

The Black Butterfly is a Robin Hood-esque thief who steals from rich, corrupt ministers to distribute their wealth to the poor, evading the authorities by night and making a name for herself as she strikes fear in evil-doers. But in reality, she is Kwan Bao-zhu (Lisa Chiao), the daughter of the retired warrior, Golden Sword Kwan Yee, who is oblivious to his only child being a thief in secret.

Soon enough, the Kwan father and daughter will uncover each other's secrets, when they each tried to investigate the theft of an imperial seal, and ends up working together to defeat a powerful bandit lord terrorizing the city.

The Black Butterfly contain examples of: