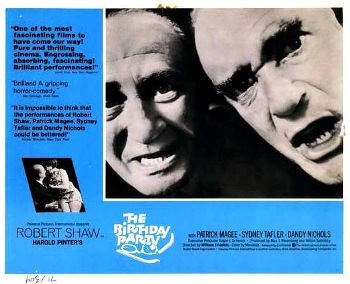 A poster for the 1968 film adaptation, which starred Robert Shaw and Patrick Magee and was directed by William Friedkin.
Advertisement:

The Birthday Party is a 1950s "Comedy of Menace" written by Harold Pinter. It concerns a boarding house on The Great British Seaside run by Mr and Mrs Bowles, a Happily Married couple, and their single tenant, Stanley Weber, a former concert pianist who seems to have come from nowhere. Life trudges by slowly until the annoucement of two guests arriving, two men who seem to have some sort of link with Stanley's Mysterious Past.

Nothing to do with Nick Cave's original band.