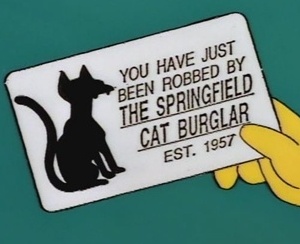 A Calling Card is a piece of evidence or item deliberately left at the scene of a crime to serve as perpetrator's "signature". Sometimes it's a literal playing card or gamepiece left near the scene of the crime, or perhaps the victims are arranged in strange poses.

The term comes from a largely Forgotten Trope from a time before the invention and proliferation of the home telephone. Back then, if you wanted to talk to your friends in real-time, you had to actually talk to them face-to-face. Women had a system where they would stop at each other's homes unannounced, to meet with (usually, though not always) the lady of the house just to chat. Needless to say, there was no guarantee of actually getting to do so at that moment, because she might not have been home. If Alice wanted to visit with ("call on") Betty, but Betty wasn't home, then Alice would leave a "calling card" with her name on it. (Kind of like a modern-day business card, except for personal use.) Like the trope, it was unique to her, and she may have left several of them throughout the neighborhood or town, depending on just how many of her friends she unsuccessfully attempted to call on. She would either leave it in a dish left for this purpose, or if Betty was wealthy enough to have one, leave it with the maid or the butler, and it was expected that Betty would "call on" Alice when she got the chance. When the telephone was invented and came to more and more homes, it simply wasn't necessary to go running around to others' homes just to chat, and thus both "calling" and literal "calling cards" died out.

Actual calling cards are rare in Real Life, because it would make it very easy for the cops to track you down; but in fiction, it seems like every villain has to have one for stamping their achievements with.

Phantom thieves and particularly cocky crooks may even send their calling card before committing the crime, warning their target about what's going to happen. This may be for practical reasons, such as turning the increased security against the target or distracting them by focusing the police's attention elsewhere, or simply as a Badass Boast: if the criminal can pull off their crime even when the target is on highest alert, surely they must be incredibly skilled.

Occasionally, a smart character may even use another villain's calling card to frame them. If the villain is well known, and their calling card shows up before they're introduced in the current continuity, (or if said Villain has been missing or dead for some time), then it's a nice Sequel Hook, or simply a hint of what's to come.

Sometimes, the calling card may be a result of the villain's M.O. (not necessarily a Card-Carrying Villain) or distinctive Weapon of Choice. One obvious example: vampires always leave their characteristic two-holed neck bite. For people who literally use this trope as a weapon, see Death Dealer.

This has become a Dead Horse Trope in Comic Books, where it was once a staple. A hero may also have a calling card, especially one who typically disappears after stopping the criminals rather than hanging around to discuss things with the police.

For actual calling cards (which a criminal may also leave, although it's a bit obvious), see My Card.

The Shadow would shape the wrappers from complementary hotel chocolates into penises for the police to find. Since the Shadow was actually Bitsy, the wrappers were a passive-aggressive note for her father because he wished that Bitsy was a boy named Mark instead.

The Shadow would shape the wrappers from complementary hotel chocolates into penises for the police to find. Since the Shadow was actually Bitsy, the wrappers were a passive-aggressive note for her father because he wished that Bitsy was a boy named Mark instead.