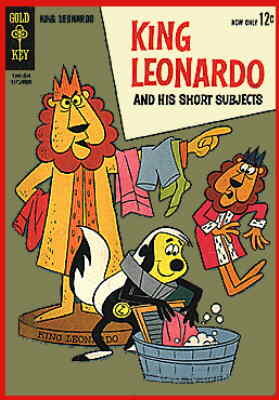 King Leonardo and His Short Subjects, debuting on NBC on October 3, 1960, was the second made-for-Saturday-morning network cartoon show (Hanna-Barbera's The Ruff & Reddy Show was the first). It was the initial production of Leonardo Productions-Total Television.

King Leonardo was the leonine ruler of the kingdom Bongo Congo, whose main industry was making bongo drums. Leonardo was benevolent but prone to temper flares once in awhile. His prime minister, Odie Cologne (a skunk), produces the kingdom's second major product, perfume. Gangster rodent Biggy Rat and the king's twin brother, Itchy, seek to usurp Leonardo and place Itchy on the throne, making Bongo Congo's coffers readily available to Biggy. But Odie comes in and throws a monkey wrench into their plans.

Two episodes making up a story arc of Leonardo bookend the show. In between is either The Hunter, a clueless canine gumshoe, or Tooter Turtle, a naive terrapin who seeks Mr. Wizard the lizard in granting his wish to be somebody important (only he gets himself in hot water toward the conclusion and has Mr. Wizard bring him home).

The first season was animated by TV Spots; ensuing seasons were made by Gamma Animation in Mexico City. After three seasons on NBC, the show was made available for syndication in 15- or 30-minute installments under the new title The King and Odie. Selected episodes of all features ran concurrently on The Underdog Show and Tennessee Tuxedo and His Tales. Elements also became part of Dudley Do-Right and Friends in syndication.