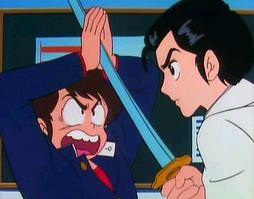 Stopping a razor-sharp blade requires only your hands... at least in a cartoon.
"Grabbing a sword by the blade isn't a valid move, is it?"
— Antimony, Gunnerkrigg Court
Advertisement:

No sword on hand, and about to be slashed? No problem! Reach out and Clap Your Hands If You Believe... you can stop a blade barehanded, presumably by applying friction to the sides, since Blocking Stops All Damage. At the extreme end are characters capable of stopping a blade between two fingers or — if Made of Iron — simply bouncing the blade off their finger or arm, though this trope is typically based on technique rather than invulnerability (which would render any defense superfluous).

A common trope in Manga and Anime, it is known in Japan as Shinken Shirahadori,note catching a moving blade which is part of Martial Arts training. The Real Life technique of this name, however, does not actually involve blocking the sword with a bare hand, but preventing the opponent from drawing his sword. Well, it seems likely that nobody in Japan was stupid enough to catch a sharp blade being swung at full speed with his bare hands.

As the MythBusters demonstrate, the "clap between your hands" trick of stopping a full-speed sword cut won't work: The reflexes and speed needed to catch the flats of a blade coming at about 40 mph/65 kphnote ballpark figure for a European longsword quoted by Skallagrim between two hands without touching the edge are beyond most people.note This is more difficult than, say, catching a baseball, where you don't fail by moving "too early" because it won't maim you if you just stick your palm in its path to intercept it. This means that the blade will probably either avoid your block completely if you clap a fraction of a second too late, or else slice your palms and/or fingers off when you catch it imperfectly and probably continue cutting to your head without losing momentum. Furthermore, if the attacker twists the sword to present the edge diagonally instead of vertically, the defender will get cut through one hand or the other regardless of timing. However, a trained martial artist using hand protection like the metal grips used to help climb walls could pull off this technique while (depending on size) presenting the illusion of doing it barehanded.

In a case of Reality Is Unrealistic, if you are a skilled fencer there are actually ways to grab an opponent's blade with your bare hands, immobilizing their weapon or wrenching it out of their grasp with little or no harm to yourself if you succeed. The key is that you are not supposed to catch the strike itself, which is when the blade is moving at its highest speed. Instead—if you have nothing but bare hands—you need to either rush in and seize his arms while he's in the middle of drawing back to strike, or dodge his strike in such a way that you're in a position to grab his sword when it's come to a stop at the end of the swing. If you have an object to block with such as a lantern or a rolled-up cloak, you can stifle the movement of his sword before grabbing his arrested blade with your free hand. The appropriate grip will try to put most of the pressure on the flats of the blade instead of the edge(s), and hold it firmly enough to prevent the edge from sliding in one's grasp, which is how one tends to get cut. That's the theory, at least. Don't try this with sharp blades unless you're some kind of expert.

If done almost right, and the user retains their hand, don't be surprised by a Bloody Handprint to emphasize the injury. Characters may need to enter a Meditation Powerup to be able to catch the blade. An offensive counterpart would be Razor-Sharp Hand.

Yu is hunted by Turkish assassins after he arrives in Turkey from Japan. While fighting the last assassin, the Japanese Spriggan agent uses his bare hands to grab the scimitar before using them to break the blade.

Yu is hunted by Turkish assassins after he arrives in Turkey from Japan. While fighting the last assassin, the Japanese Spriggan agent uses his bare hands to grab the scimitar before using them to break the blade.