Film / Play Misty for Me 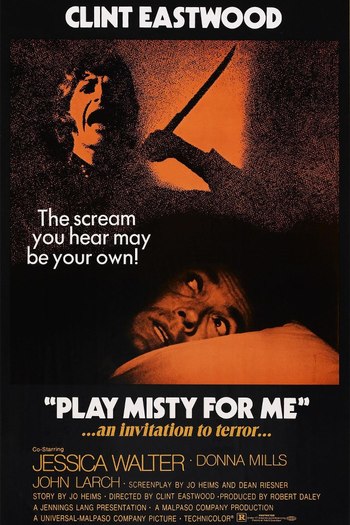 "And this maiden, she lived with no other thought than to love and be loved by you."
Advertisement:

Play Misty for Me is a 1971 American Psychological Thriller film, marking the directorial debut of its star Clint Eastwood.

Dave Garver (Eastwood) is a womanizing overnight jazz DJ on radio station KRML in Carmel-by-the-Sea, California. Visiting his Local Hangout after the show, he meets Evelyn Draper (Jessica Walter), who claims to have been stood up by her date. After he drives her back to her house, she reveals that she's a big fan of Dave's show and that the date story was a lie; she went to the bar (which he talks about on his show) specifically in order to meet him. Dave also figures out that Evelyn is the woman who constantly phones the station while he's on the air, asking him to play Erroll Garner's song "Misty". Agreeing to keep things casual, Dave and Evelyn have a one-night stand.

Afterward, however, Evelyn insists on making herself part of Dave's life, and Dave enjoys the attention... at first. However, his ex-girlfriend Tobie Williams (Donna Mills) moves back to town and Dave decides to patch things up. After he tries to tell Evelyn that he's not interested in any further involvement, she responds by attempting suicide. Meanwhile, Dave and Tobie get closer, but Evelyn isn't going to take it and tries any way she can to keep Dave to herself, even if it means getting rid of Tobie for good...