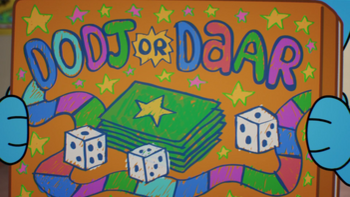 It's game night, and the characters want to have some fun. Why not do it with a classic board game?

But they usually run into one of several problems:

For any of the reasons listed above, the work ends up making do with a fake one.

More often than not, and similarly to a Fictional Video Game (its Sister Trope), these games will draw heavy inspiration from popular real life board games, if not be just reskinned and/or recolored copies of them. Another version is making the game so needlessly complex with countless rules that it just isn't fun to play (although one character, usually the one who brought or suggested the game in the first place, will insist that it is fun or not as complex as it seems).

If one becomes popular enough with its out-of-universe audience, it may undergo Defictionalization, either by fans or officially released licensed versions.

Can also be a Bland-Name Product (fictional brand name similar to that of a real life product/company). Can overlap with Calvinball if the rules of the board game are too bizarre to understand.

Compare Fictional Sport. Super-Trope for Cloneopoly, which are fictional versions of Monopoly.

Mr. Brittas makes his staff play his own version of the Game of Life to get them interested in the centre's pension scheme.

Mr. Brittas makes his staff play his own version of the Game of Life to get them interested in the centre's pension scheme.