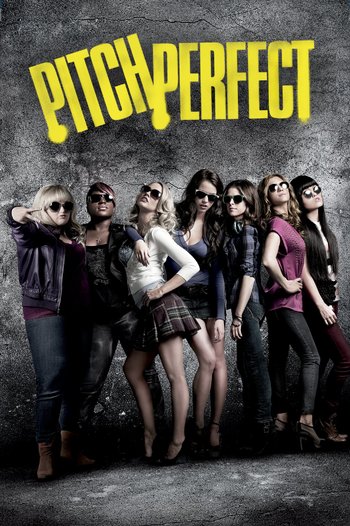 "Even though some of you are pretty thin, you all have fat hearts, and that's what matters."
— Fat Amy
Advertisement:

The story follows Beca Mitchell, an aspiring music producer who is forced to go to Barden University by her father, who is a teacher there. He agrees to fund Beca's move to L.A. if she agrees to give college a chance and join at least one club. She ends up joining the Barden Bellas, the school's all female a cappella group. There, she is introduced to the world of collegiate a cappella as the Bellas fight to defeat their all-male rival group, the Treblemakers.

Pitch Perfect 2 was released in 2015, directed by Elizabeth Banks (who also co-produced both films) and with several of the previous cast members reprising their roles. It follows the Bellas as they compete in the A Cappella world championships, hoping to be the first American team to win (which has never happened because the entire world hates America). Hailee Steinfeld joins the cast as new member Emily Junk.

Pitch Perfect 3 was released in 2017. The Bellas, all dissatisfied with their post-college lives, reunite and join a USO tour as a way of reliving their glory days.

In September 2021, a spinoff sequel series (starring Adam Devine, reprising his role as Bumper from the films) was announced for Peacock. The series will follow Bumper he moves to Germany to restart his music career when one of his songs gets popular there.

Now has a Character Sheet under construction.

Example of:
Singing in the Shower