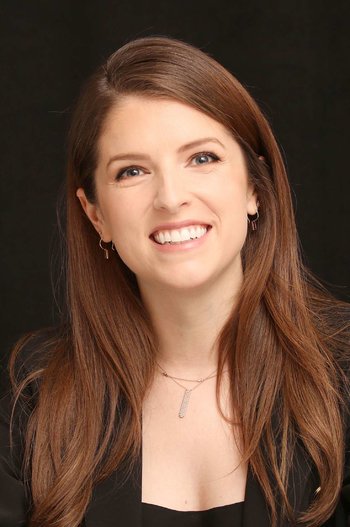 "If I die unexpectedly can everyone just do the right thing and pretend I was a way better person than I am?"
Advertisement:

Anna Cooke Kendrick (born August 9, 1985 in Portland, Maine) is an American actor best known for her role as Beca Mitchell in the Pitch Perfect trilogy. She also played Jessica Stanley in The Twilight Saga series and earned Academy Award, Golden Globe, and BAFTA nominations for her role as Natalie Keener in Up in the Air.

Kendrick started her career on Broadway at the age of 12, traveling to auditions in New York on Greyhound coaches — with only her 14-year-old brother as a chaperone — since her parents were too busy to drive her, and eventually landing a role in a stage production of High Society, for which she earned a Tony Award nomination.

With a long background in theater, she is a very capable singer and has been consistently met with praise for her onscreen charisma and acting chops. Also has a very supportive mother who has a habit of aggressively calling distributors in order to get Anna's indie films shown in her hometown — and if she's successful, then going with "throngs of friends" to make sure the movie does well locally.

She wrote her autobigraphical essays that compiled into a book, titled Scrappy Little Nobody. It was published on November 2016. She is in a relationship with Bill Hader, who co-starred with her on Noelle.

Anna Kendrick and her works provide examples of:

Example of:
Singing in the Shower