Film / Scott Pilgrim vs. The World 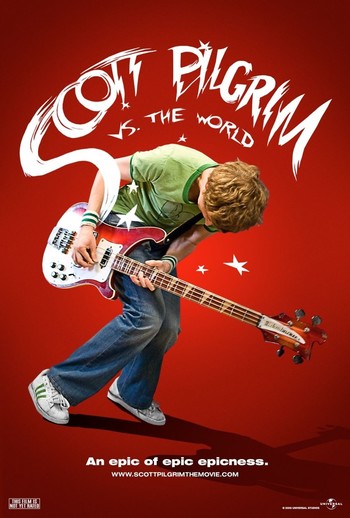 An epic of epic epicness.
Scott: I have to fight—
Ramona: Defeat.
Scott: Defeat your seven evil exes if we're going to continue to date?
Ramona: Pretty much.
Scott: So what you're saying right now is...we are dating?
Ramona: Uh...I guess.
Scott: Does that mean we can make out?
Ramona: Sure.
Scott: Cool.
Advertisement:

Scott Pilgrim vs. The World is a 2010 film adaptation of the comic book series Scott Pilgrim by Bryan Lee O'Malley. It is the third feature film directed by Edgar Wright (who also co-wrote), as well as his first film not shot in his native Britain, instead being filmed in Toronto, where the story of the comic takes place.

The film, like its source material, is about Scott Pilgrim (Michael Cera), a twenty-something slacker who plays bass for the scrappy indie band Sex Bob-Omb, falls in love with an American girl named Ramona Flowers (Mary Elizabeth Winstead), and realizes that he must defeat her seven evil exes in order to date her... in a universe that acts like a real-life version of River City Ransom, where there are combo meters, written sound effects spelled out in midair, points, and extra lives.

A film adaptation of the comics was proposed shortly after the first volume's release, with Wright being attached early on. Since the comic was as yet unfinished during filming, the film moves in a slightly different direction, though core elements remain the same.

While critics and audiences loved the film, its extremely niche humor and style made it a difficult sell, and it didn't recoup its budget. However, it fared far better in the home market and went on to become one of the biggest cult classics of its time due to factors including Wright's filmmaking style offering a near-perfect visual translation of the story, a rare example of a retroactive All-Star Cast, and an endlessly quotable script.

Now has its own Shout-Out page, as it was starting to take up a lot of room.

Scott Pilgrim vs. The World provides examples of:

Scott challenges Lucas Lee to perform a grind down some stairs, causing him to go fast enough without being able to stop.

Example of:
Too Fast to Stop

Scott challenges Lucas Lee to perform a grind down some stairs, causing him to go fast enough without being able to stop.