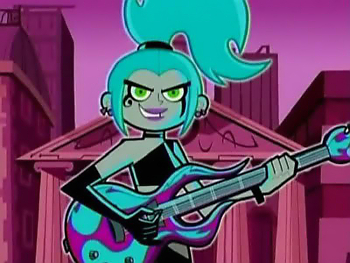 You will remember her name.
"Let me tell you my evil scheme
I'm gonna enslave your minds with a predictable melody
And uncomplicated rhymes
And if I asked you to, you'd even change your name to 'Amy'
Because you're gonna yodel-odel-odel-obey me."
— Dr. Doofenshmirtz, Phineas and Ferb, "Yodel-Odel-Obey Me"
Advertisement:

There is this one pop singer, who recently became the biggest thing since television. She's beautiful and came out of nowhere all of a sudden. Oh, and her voice is so wonderful and clear and great and, and, and...Ah, let's just listen to her new single! ...Oh wait, how come I'm so tired suddenly? Why are the words "OBEY ME" stuck in my head? I don't remem...Oh, Crap!

Congratulations, you encountered the Evil Diva! With her magical voice, microphone, instrument, etc, the Evil Diva becomes a rising star and draws all of the world's attention to herself and her "talent". Her songs may seem better to you than they actually are, hypnotizing you, turning you into The Heartless, stealing your soul, or the like. She's also always female and usually a poster-child example of Evil Is Sexy. In an Urban Fantasy setting, you can expect her to be a magical creature in disguise, usually a siren or a demoness. She's a subtrope of the Idol Singer and may or may not overlap with the Dark Magical Girl. As such, she has a tendency to pull a Heel–Face Turn.

The Hero may or may not be immune to the effects of her music. His/Her Sidekicks or True Companions are usually not. Her fighting style usually incorporates The Power of Rock, and her appearance usually signals a Musical Episode.

Compare Magic Idol Singer, of which this is the Evil Counterpart. Also compare and contrast The Diva, who may act like her but doesn't go out of her way to be a bitch.

Not to be confused with the webcomic Evil Diva. Or with an evil Drama Queen or all-female examples of Evil Is Hammy, though both generally do apply to an Evil Diva.

Ember is a ghostly pop star who makes liberal use of Mind Control Music, and she gets more powerful as more people chant her name.

Ember is a ghostly pop star who makes liberal use of Mind Control Music, and she gets more powerful as more people chant her name.