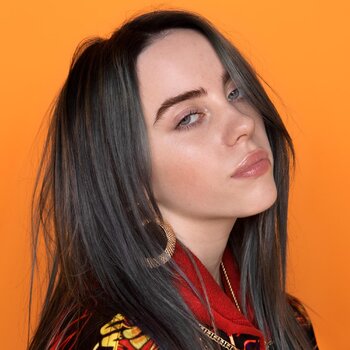 you should see her in a crown.
I’m the bad guy ...
Duh!
— “bad guy”
Influences:
Advertisement:

Eilish's music, often described as “noir pop” for its world-weary tone and dark lyrical themes, is a unique brand of blues-y minimalist alternative pop featuring her signature breathy vocals as well as intricate, subtle sound design. The closest approximate label for this sound that many have taken to is Bedroom Pop, with Eilish being credited for paving the way for the genre to enter the mainstream. Her music is a collaboration with her multi-instrumentalist brother Finneas O'Connell, who handles most of the production.

Eilish's first viral single, “ocean eyes,” was released in 2016 when she was fifteen years old, and was followed the next year by the EP dont smile at me. Her debut album, WHEN WE ALL FALL ASLEEP, WHERE DO WE GO?, became the most pre-ordered album in Apple Music history before its official release in March 2019. It debuted at number one on the US Billboard 200, making her the first artist born in the 21st century to reach that slot. At the 62nd annual Grammy Awards in 2020, Eilish became the second person in history, after Christopher Cross in 1981, to win Record, Album, and Song of the Year along with Best New Artist in the same year.

In January 2020, she was announced as the performer and songwriter of the main theme of No Time to Die, the 25th James Bond film. She's both the youngest singer and youngest songwriter in the history of the franchise. The song was released 20 months before the film itself due to the COVID-19 Pandemic delaying the release, and won several awards, including the Grammy Award for Best Song Written for Visual Media in 2021, followed by the Golden Globe Award for Best Original Song, the Critics' Choice Movie Award for Best Song, and the Academy Award for Best Original Song the next year; she is the first person born in the 21st century to win an Oscar.

In 2021, she was the subject of the documentary Billie Eilish: The World's A Little Blurry, released theatrically by Neon and on streaming by Apple TV+. Five months after the film's release, her second album Happier Than Ever was released in July of that year. 2022 sees her co-writing songs alongside O’Conner for the Pixar film Turning Red.

Eilish and her style
Appearing in her songs
Feedback

Example of:
You Are Better Than You Think You Are