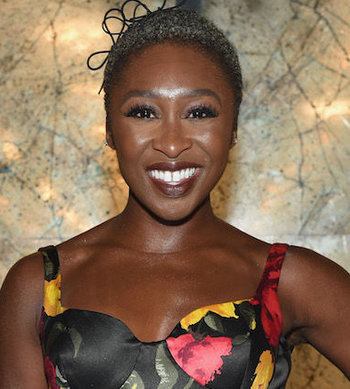 Born in London to Nigerian parents, Erivo started out studying music psychology before being accepted into the Royal Academy of Dramatic Art, where she trained in musical theatre. Her breakout role was that of Celie in The Color Purple, which she first played in 2013 as part of production for the Menier Chocolate Factory, and later reprised the part in the 2015 Broadway revival of the show, winning the Tony for Best Actress in a Musical in the process.

In 2018 she made her break into film, with acclaimed supporting roles in Bad Times at the El Royale and Widows, and has since been cast in the Sci-Fi novel adaptation Chaos Walking (2021). She played the title role in the Harriet Tubman biopic Harriet, for which she received Academy Award nominations for Best Actress and Best Song ("Stand Up"). She has been announced to play the role of Elphaba, destined to become the Wicked Witch of the West, in the upcoming film adaptation of Wicked.