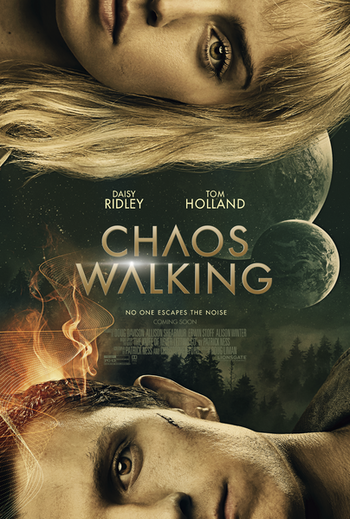 No one escapes the Noise
Viola: It's strange to see everything you're thinking.
Todd: Well, it's strange for me too, not knowing what's going on in your head. I mean, I don't know, you might not like my dog, or you want to hit me over the head with a rock or something.
Viola: I like your dog.
Advertisement:

Chaos Walking is a 2021 American dystopian science fiction action film. It is based upon The Knife of Never Letting Go, the first book in the Chaos Walking trilogy by Patrick Ness. The film was directed by Doug Liman and the screenplay written by Ness and Christopher Ford. note Jamie Linden, John Lee Hancock, Gary Spinelli and Lindsey Beer also contributed, revising the first draft written by Charlie Kaufman It stars Tom Holland, Daisy Ridley and Mads Mikkelsen.

On the planet of New World, a devastating war between human colonists and the native Spackle resulted in all the women and half the men being wiped out, while the surviving men are afflicted with Noise, a condition that means everyone can see and hear their thoughts. Todd Hewitt (Holland) is one such survivor, living in Prentisstown under the leadership of the power-hungry David Prentiss (Mikkelsen), but everything changes when he meets Viola Eade (Ridley), a girl who crashlands on New World and is unaffected by Noise. Together, Todd and Viola uncover a dark secret that will change both their worlds.

After several years in Development Hell, the film was released on 5th March 2021. note in most places; South Korea got a 24th February theatrical release and Australia got a 4th March release