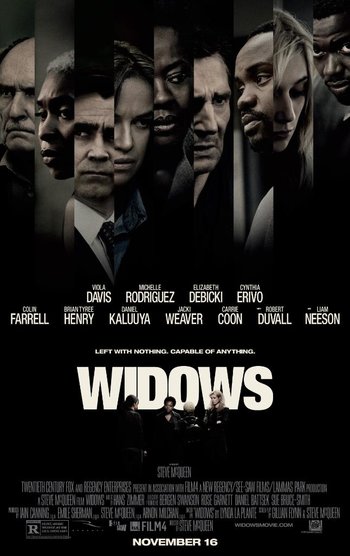 Widows is a 2018 Crime Fiction Thriller directed by Steve McQueen and written by him and Gillian Flynn (Gone Girl). It is based on the 1983 ITV series of the same name.

The movie follows a group of women whose husbands were killed while committing a robbery, losing all of the money they stole in the process. Soon after, the widows find themselves threatened by Jamal Manning, the criminal who their husbands had targeted, and who demands they repay him the $2 million lost during the heist. Veronica, the leader of the women, decides to use plans for another heist left behind by her husband to get the money and enlists her fellow widows to help her pull it off.

Meanwhile, Manning is attempting to get elected alderman of his district, facing off against the son of an influential local power broker who just happens to be the intended target of the widows' heist.