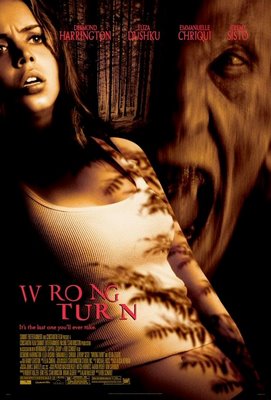 "It's the last one you'll ever take."
— Tagline
Advertisement:

The Wrong Turn franchise is a series of backwood horror films, which started with this 2003 film. It was produced by Stan Winston, and the hillbilly makeup were provided by his team.

A man named Chris and a bunch of other city people get stranded on a stretch of unused road in the middle of the backwoods of West Virginia. As they try to make their way back to civilization, they encounter inbred hillbillies who hunt them for food as they run and fight for their lives.

Rest of the films in the series are:

It was announced in 2020 that the series was getting a Reboot. The reboot sees the cannibals replaced with a self-sufficient civilization who don't actively seek out victims, but aren't very merciful to those who intrude on their land.