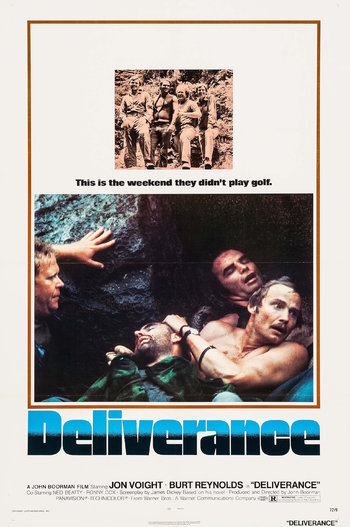 A 1972 American adventure thriller film adapted by James Dickey from his own 1970 novel of the same name, directed by John Boorman and starring Jon Voight, Burt Reynolds, Ned Beatty, and Ronny Cox. It's #15 on AFI's "100 Years...100 Thrills" list.

The film involves four middle-class suburbanites from Atlanta who decide to spend a weekend canoeing in the wild countryside of Georgia, hoping to have fun and witness the area's unspoiled beauty before the Cahulawassee River valley is flooded by construction of a dam. Two of the guys in question, Lewis Medlock (Reynolds) and Ed Gentry (Voight), are experienced in the ways of the outdoors, while the other two, Bobby Trippe (Beatty) and Drew Ballinger (Cox), are entirely new to this.

After being separated from the other two, Bobby and Ed encounter a pair of local mountain men who force them into the woods with a shotgun. In the film's most infamous scene, Bobby is forced to undress and "squeal like a pig" and then violently sodomized by one of the men. As the duo prepares to do the same thing to Ed, Lewis shows up and kills the rapist with a recurve bow. Following a brief but heated discussion about what to do with his body, the four elect to bury him and carry on like nothing happened. Unfortunately, the dead man's accomplice got away, and is now hunting them down like animals, throwing them all into a struggle to survive.

The film is best known for the page quote about squealing like a pig and the "Dueling Banjos" scene.

If you ever see the film you will never be able to enjoy banjos again. Or go canoeing. Or visit rural Georgia. Or, you know, sleep.