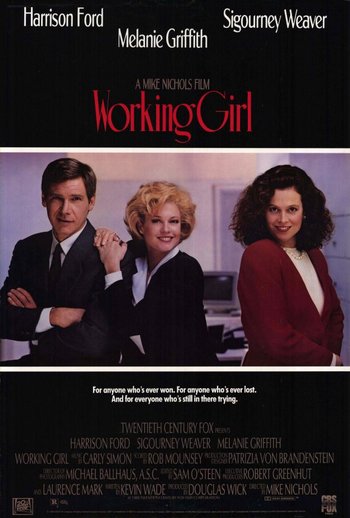 "I've got a head for business and a bod for sin."
— Tess McGill
Advertisement:

This 1988 comedy, directed by Mike Nichols, shows that even if you come from the wrong side of the Hudson, you can make it in business so long as you've got the balls to see through a good idea.

Tess McGill (Melanie Griffith) is desperate to be taken seriously and recognized for her brains and business skill, and hopes to rise from the typing pool at the Wall Street investment firm Petty Marsh. Given one last chance after blowing off "Bob from Arbitrage," she's made personal assistant to Katharine Parker (Sigourney Weaver) in Mergers & Acquisitions. Katharine is willing to accept input and ideas from her, and is intrigued by Tess's big idea that would save a large company from a foreign takeover. Katharine then breaks her leg while away skiing in Switzerland, and she asks Tess to look after things in her absence. Tess soon discovers that Katharine is going to try to pass off Tess's idea as her own to the CEO of the threatened company. On top of this, she discovers her boyfriend (Alec Baldwin) is also cheating on her. Tess sets out to do a deal by using her idea herself and teams up with Jack Trainer (Harrison Ford) to close the deal before Katharine's return. The two slowly fall for each other little knowing that the other is Katharine's boyfriend/secretary....

Working Girl was one of the more financially successful and critically acclaimed comedies of 1988. It was nominated for six Oscars: Best Actress for Melanie Griffith, Best Supporting Actress for both Joan Cusack and Sigourney Weaver, Best Director for Mike Nichols, and Best Picture. Carly Simon won the Best Original Song Oscar for "Let the River Run". The film also won four Golden Globes, with Griffith and Weaver each winning for acting, Simon for her song, and the movie as a whole for Best Motion Picture - Comedy or Musical. The movie also inspired a short-lived 1990 NBC sitcom of the same name, starring none other than Sandra Bullock as Tess McGill. A Screen-to-Stage Adaptation, with music by Cyndi Lauper, was announced in 2017.

Some say it's the "sassy sister film to Die Hard."

Working Girls is a different film entirely, about a New York brothel and its employees, and was released as an acclaimed indie production in 1986.

A pre-stardom Kevin Spacey has one scene as a lecherous, coke-sniffing arbitrager. A pre-stardom David Duchovny has an even smaller part, as a guest at Tess's birthday party.