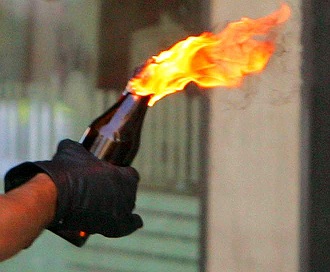 Burns your throat, as well as your face!
"I'm telling you, Molotov cocktails work. Any time I had a problem, and I threw a Molotov cocktail, boom! Right away, I had a different problem."
— Jason Mendoza, The Good Place
Advertisement:

AKA petrol bomb or people's grenade, a simple Improvised Weapon originating from Spain for all your asymmetric warfare needs. Brilliant in its simplicity: a glass bottle full of gasoline (or very high-proof alcohol, and even turpentine in some cases), and a burning rag on the bottleneck, thrown at the enemy. The bottle breaks on impact and spreads its flammable contents, the still-burning rag hits the liquid, and presto, your target's on fire.

The Molotov cocktail is named for Vyacheslav Molotov, the Soviet foreign minister who is historically infamous for signing a clandestine non-aggression pact

with Nazi Germany in 1939; when Finland (which had been ceded to the Soviets under the Molotov-Ribbentrop Pact) began to suffer Soviet bombing runs at the start of the Winter War, Molotov claimed they were not 'bombs', but food and supply drops, causing the Finnish soldiers to facetiously dub their hand-made petrol explosives 'Molotov cocktails', to go with the 'Molotov breadbaskets' the Soviets were dropping. (This also means if you see the term "Molotov cocktail" used in media set before about 1940, it's Artistic License – History. This happens surprisingly often.)

In Video Games, the effect of the heat is usually ignored. May be shown to be a bottle of alcohol with a flaming handkerchief stuffed inside.

It's also common to be an Improvised Weapon by raiding a local bar or liquor cabinet. But it should be noted that only the highest proof drinks would be of any effectiveness. So actual cocktail drinks wouldn't work, only harder alcohol like vodka or rum (and these will only bring grief to the most lightly clothed of foes).

Popular in guerrilla warfare, protests, and riots. Common way to Kill It with Fire.

For a person who uses this and other handheld explosives or incendiaries as a Weapon of Choice, see Throw Down the Bomblet. Compare Bizarre Beverage Use for when they use the liquid in the bottle for ulterior motives.

Robin lights and throws a Molotov at Vecna to weaken him.

Robin lights and throws a Molotov at Vecna to weaken him.