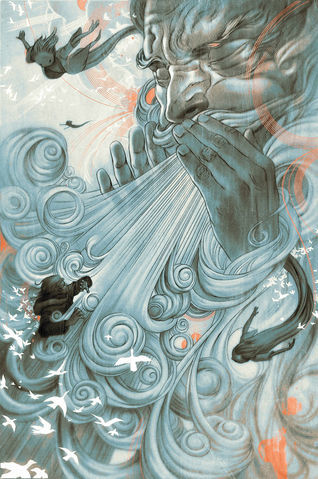 As with many natural phenomena, the North Wind is often given an Anthropomorphic Personification in fiction, myth, and folklore. This anthropomorphic version is almost always male, and usually takes the form of an old man made of clouds or snow. He can be portrayed in any moral alignment, but tends to be portrayed as a malevolent character who enjoys freezing things, and especially making humans cold. After all, Evil Is Deathly Cold. However, he can just as easily be more neutral, or maybe even benevolent.

Having Blow You Away powers is practically a necessity, although he may also have other Elemental Powers such as An Ice Person.

The Trope Namer is Over the Garden Wall. In "Babes in the Woods," Greg imagines the cold wind outside as a villainous character in his dream, the North Wind. The North Wind is introduced with an ominous Villain Song called "The Old North Wind."