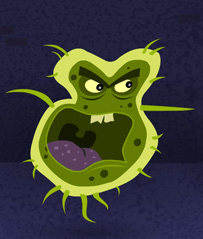 "Today, we will move out further and faster than ever! Any moment now, all 10,000 of us will be launched into the world at 100 miles an hour, armed with all our germy weapons, to attack the humans!" *evil laugh*
— Staph Sargent, "Protect, Don't Infect"
Advertisement:

Bacteria, viruses and other pathogens — invisible little organisms that make our lives miserable by causing diseases. Before the invention of microscopes, we did not know what they looked like. Now we know that both viruses

◊ and bacteria can have various geometrical forms that look vastly different from multicellular organisms.

However, fiction tends to largely ignore this. When viruses and bacteria need to make an appearance — for example, as part of a "Fantastic Voyage" Plot or in an encounter with Mega-Microbes — they will be portrayed instead as monstrous creatures. Whether humanoid, reptilian, insectoid or simply blob-like, they will have recognizable (although often mismatched) body parts such as jaws full of teeth, eyes (often in unusual numbers or at unusual places), limbs or tentacles, all of which would normally be found only on multicellular organisms. The reason for this is that Most Writers Are Human, and it's easier to portray germs similar to creatures that we immediately recognize as living and dangerous. If they are capable of talking, expect them to be Card Carrying Villains prone to Evil Gloating.

Almost always present as major antagonists in any case of Anthropomorphized Anatomy.

A subtrope to Artistic License – Biology. Often overlaps with its sister trope to Mega-Microbes — that one is about germs at the size comparable to humans, whereas this is about monster-like anatomical features found on them. Compare Seeker White Blood Cells, who will often engage in combat with these, and will often also get a similarly monstrous portrayal. Although the trope primarily covers biological microorganisms, computer viruses may get a similar portrayal in the case of a Contagious A.I.. Not to be confused with The Virus, which is a disease that turns its hosts into monsters. Also not to be confused with a person who is Terrified of Germs (although such a person will likely imagine germs as this trope).