Literature / The Heroes of Olympus 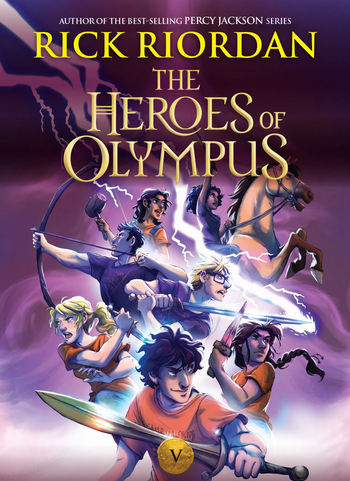 Seven half-bloods shall answer the call,
To storm or fire, the world must fall,
An oath to keep with a final breath,
And foes bear arms to the Doors of Death.
— The Prophecy of Seven
Advertisement:

Warning: This page contains spoilers for both the first and second series.

A Sequel Series to Percy Jackson and the Olympians by Rick Riordan, set a short time after. It is the second set of novels in The Camp Half-Blood Series, and is followed by The Trials of Apollo.

The first book, The Lost Hero, introduces a new half-blood named Jason who finds himself in a school bus with absolutely no memory of who or what he is, along with a girl, Piper, and a boy, Leo. The three turn out to be half-bloods and run into Annabeth (from the first series) and someone named Butch, who are looking for the missing Percy Jackson. Jason, Piper, and Leo are sent on a quest to free the captured Hera and end up realizing their destinies are far greater than they ever imagined. Meanwhile, Gaea the Earth Mother is stirring and reveals her plan to take down the gods, who are in no condition to fight her due to their warring Greek and Roman aspects.

At around the same time, an amnesiac Percy Jackson finds his way to a haven for Roman demigods — Camp Jupiter — and leads two newbie heroes, Frank and Hazel, on a quest to free Thanatos, the god of death.

The two groups unite soon after — Percy, Jason, the four new demigods, and Annabeth join forces to fly a Cool Airship to Rome, with Annabeth following a secret and dangerous mission from her vengeful mother. Now, the prophesied Seven and their allies must somehow unite the warring Greek and Roman camps, fight their way through the monsters, mythological figures, and various other enemies that arise to hinder them, as well as figure out a way stop Gaea before she rises...

The series is comprised of five books:

Has a Best Installment Crowner

Tropes for the crossover stories The Son of Sobek, The Staff of Serapis and The Crown of Ptolemy are on Demigods & Magicians page.

Please place tropes which only apply to one character on the character sheet. The main article is getting cluttered.

Alternative Title(s): The Heroes Of Olympus