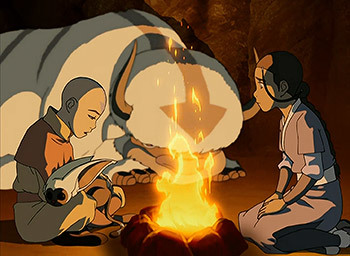 "I'll never forget the day the monks told me..."
Aang: Well, it's kind of a long story.
Katara: I'm going to try and get a little fire going.
— Avatar: The Last Airbender, "The Storm" (pictured)
Advertisement:

Most stories take place over more than one day. This opens up good opportunities for a quick break or moment of silence during the nighttime as the characters get some much-needed rest. And what better way is there to squeeze in some character revelations than a nice, calm campfire right before they drift off to sleep?

The mood and lighting of the fire and the nighttime sky are good settings already, and the characters might also have some hidden secrets or pent-up stress that they'd like to share. Often, this is a good point for two characters who initially hated each other begin to warm up. Some romantic feelings might even start to blossom. If there is more than three characters and two of them haven't had any alone time, a common way to get rid of the third is to have him or her go off to gather some firewood.

Can also apply to indoor fires, like at an inn or a fireplace, and, in Japanese works, a kotatsu.

Compare Fire of Comfort and Stargazing Scene. Might overlap with Action Film, Quiet Drama Scene or After Action Patch Up, or Trauma Inn if that's where the fire is located. If there does turn out to be romance involved, not to be confused with Flirting Under Fire.

Arlo and his new friends have a campfire rest stop where Marcellus tells about his aquarium experience and everyone bonds with each other.

Arlo and his new friends have a campfire rest stop where Marcellus tells about his aquarium experience and everyone bonds with each other.