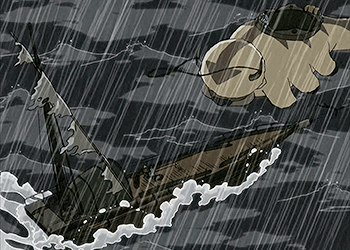 "You will learn respect, and suffering will be your teacher."
— Fire Lord Ozai
Advertisement:

The group is in need of money, so Sokka decides to help out a fisherman who is willing to pay him to help him on his next fishing trip, even though a storm seems imminent. The fisherman recognizes Aang as the Avatar "who turned his back on the world". Aang runs away in guilt, but Katara manages to track him down. Aang reveals to Katara that the monks at the Southern Air Temple wanted to send him away to the Eastern Air Temple to separate him from Monk Gyatso, the only person who cared about Aang as a person instead of as the Avatar. This led Aang to run away from home and (eventually) seal himself in the iceberg. Meanwhile, on Zuko's ship, Zuko's crew begins to question his leadership, until Iroh enlightens them on how the prince was scarred in a duel and was then banished from the Fire Nation, by his own father.

Iroh narrates how Zuko got his scar from his father Ozai when Zuko spoke against sacrificing soldiers and refusing to fight his father.

Iroh narrates how Zuko got his scar from his father Ozai when Zuko spoke against sacrificing soldiers and refusing to fight his father.