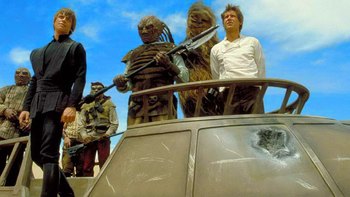 Don't worry. This is all part of the plan.
Katara: I came to rescue you.
Haru: So you got yourself arrested?
Katara: It was the only way to find you.
— Avatar: The Last Airbender, "Imprisoned"

When one, some, or all the members of a heroic or villainous side are captured, sometimes it was part of the plan all along. Other times it isn't, but the captives will make use of their improvisational skills and whip the captors in due time.

The usual set-up for this trope is for someone to willingly surrender in order to be taken into the enemy base. When a hero does this, it's usually so they can get inside the Big Bad's secret lair, stop them, and maybe rescue a few prisoners on the way. When a villain does this, it's usually so they can escape while wreaking maximum havoc; expect at least one of the heroes to be a little bit suspicious and say something like "It's too easy".

See also The Infiltration. Supertrope to Get into Jail Free; this trope doesn't require a jail setting. Compare Assimilation Backfire, Playing Possum, Wounded Gazelle Gambit. May or may not invoke Pity the Kidnapper, or involve becoming a Poisonous Captive. Often overlaps with Prison Episode, as many such episodes are the result of this. Trojan Prisoner is a variant of this when a captive(s) is brought in by their friends posing as the enemy guards to fool the other guards.

See also Self-Restraint when they willingly let themselves be put into prison and stay there for various reasons, and Play-Along Prisoner, where they could escape at any time but choose not to.