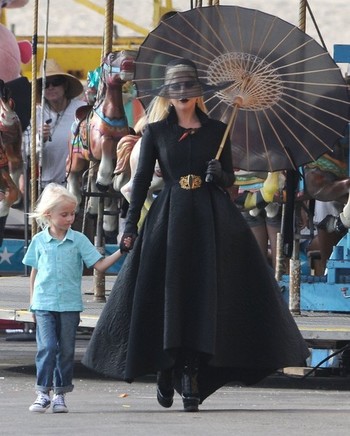 In the era of the Pedo Hunt, losing sight of one's child in a crowd of strangers is a major fear of any parent. In parks, shopping centers, or at public gatherings of any sort, responsible caregivers feel obliged to keep a wary eye on their young charges at all times.

But there's one form of children's entertainment that breaks that line-of-sight contact by its very nature: the carousel. And writers haven't let the blinking lights and bright colors distract them from noticing this; if anything, the forced cheerfulness of the environment only makes the shock of a Carousel Kidnapping all the sharper. The child goes round and round on a colorful steed, their laughing face catching the parent's eye once, twice... and on the next pass, they're gone.

For obvious reasons, major theme parks do not like this trope and are reluctant to allow film crews to stage it on their premises, so it's nearly always played out at a (nameless) Crappy Carnival or public attraction. Ferris wheels can be used as a substitute if combined with Vertical Kidnapping, or if it's the loved one waiting at ground level who vanishes.

Common in Police Procedural series, or in tales using a Circus of Fear setting... so much so, any crime show or thriller that includes a carousel scene but doesn't use this trope practically rates as a subversion.