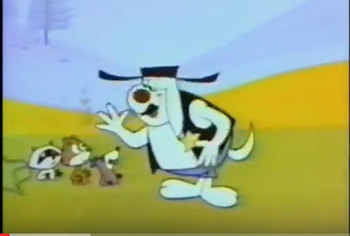 The Deputy Dawg Show was the first made-for-TV all-cartoon effort from the Terrytoons studio. It premiered in syndication in 1959. Radio personality Dayton Allen provided all the voices.

Deputy Dawg was the none-too-bright lawman in a backwoods Tennessee precinct, Creekmud Junction (the show's creator, Larz Bourne, hailed from Tennessee). His efforts to keep law and order yielded mixed results, what with Muskie Muskrat and his pals—Ty Coon, Al E. Gator and Vincent Van Gopher—stirring up trouble. Deputy Dawg also had to report to his superior, the Sheriff (the lone human in a cast of Funny Animals).

The show was as controversial as it was successful. As its main concentration of stations were in the south, many saw it as a metaphor of the end days of segregation and Jim Crow laws. Deputy Dawg, first a pale blue-gray then pure white—was the avatar of Caucasian police, and Muskie, painted brown, was the African-American trying to outwit him. Even when Deputy Dawg made live appearances (an actor in a suit), audiences in those locales were segregated. Still, the show netted its sponsor, Lay's Potato Chips, a nice revenue windfall.

In 1971, The Deputy Dawg Show made its network TV debut on NBC Saturday mornings. It ran just that season.

Ralph Bakshi owes his career to this show, as he made his professional debut as an animator here. He later further made his directorial debut in the final production season, when he handled several episodes.

Deputy Dawg, Muskie Muskrat, and Vincent Van Gopher were featured in the unsuccessful Animated Anthology pilot Curbside, where they were voiced by Billy West, Rob Paulsen, and Charlie Adler respectively.