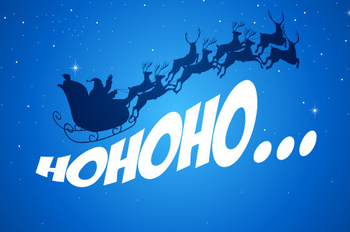 Let's just say his favorite holiday song is not "Silent Night".
"You put your whole self into that laugh, don't you?"
— Marcia to Lonesome Rhodes, A Face in the Crowd
Advertisement:

There are some unique laughs that, when imitated by anyone, immediately bring to mind a single person. It may be an Annoying Laugh or an Evil Laugh, it may be the sounds/words used, its tendency to catch on with anyone around, or the fact that it's at a terribly inappropriate time, but everyone knows who it's connected to. When this happens, this person has a Signature Laugh.

It doesn't count if it reminds you of a type of person (like the Noblewoman's Laugh), nor just a type of laugh (like The Hyena). It must be an individual who springs immediately to mind when it's heard. Can overlap somewhat with Verbal Tic.

Some of these sounds are difficult to translate onto a page, but when you hear them, you know.